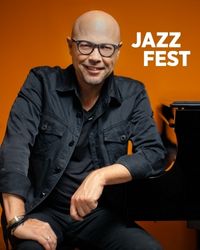 Join us as we kick off our 2023 summer festival with jazz pianist/arranger extraordinaire John Beasley joining forces with the Edmonton Jazz Orchestra, featuring the music of Thelonius Monk, re-worked by Jon Beasley for a jazz orchestra.

"John Beasley, the one-time keyboardist for Freddie Hubbard and Miles Davis, who's playing reflects a variety of generational influences, incorporating the emphatic chordal clusters of Herbie Hancock, the rhythmic quirkiness of Monk and the lush intelligence of Art Tatum into a highly refined personal voice." — Los Angeles Times

GRAMMY® Award Winner, nine-time nominee and Emmy nominee, John Beasley is an uncommonly versatile pianist. He began his career backing such jazz icons as Miles Davis and Freddie Hubbard – playing in the bands of both these trumpet greats while still in his 20s. Since then, Beasley has performed with a wide range of artists including Dianne Reeves, Ivan Lins, John Patitucci, Chaka Khan, Christian McBride, Carly Simon, Steely Dan, Lee Ritenour, and A.R. Rahman.

Thelonius Monk is a key figure in John's career. One of his musical projects is MONK'estra, a smashing big band capturing the spirit of Thelonious Monk's singular music in fresh arrangements flavoured with contemporary sounds that range from Afro-Cuban rhythms to hip-hop. Downbeat and Jazz Journal UK have given the albums 5 stars with one critic saying it is "some of the most mesmerizing big band music of recent memory" His third in the 3-series of album MONK'estra plays John Beasley showcases Beasley's compositions and more unique arrangements of Monk, Ellington, and Bird songs.

Be there for the kick-off of the 2023 Edmonton International Jazz Festival with the iconic John Beasley joining forces with Edmonton Jazz Orchestra.